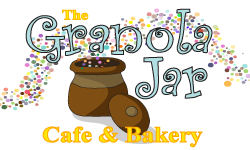 Nealie Anthony, an Evansville native, started baking as a way to satisfy her boyfriend’s sweet tooth at only 16 years old. Baking soon became a passion for her, enough so that she moved to San Francisco to go to California Culinary Academy and become a pastry chef. She graduated in 2005 and moved back to the tri-state area with her husband to start a restaurant with her mother-in-law. Nealie is now a mother along side being the sole owner of the Granola Jar.

“What inspires me is my customers. I love chatting with them, hearing what they are liking at the cafe and just how their days are going.” 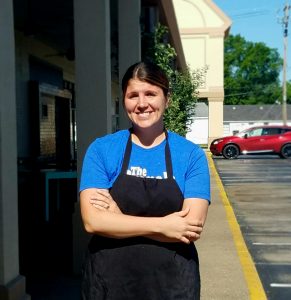 The Granola Jar was founded in August of 2006 by Nealie, her husband Ryan, and her mother-in-law. “What came first the granola or the Granola Jar?” Making and inventing granola came first, and as Ryan’s mother, Ryan, and Nealie argued about what exactly they should call their fledgling expenditure, one day it finally came to Nealie in a stroke of genius. In the beginning, the business was breakfast-centric but has transformed into a lunch/catering business as it became clear that the location demanded more. Nealie had to learn everything as she went as the company evolved.

In 2012 Nealie and her husband Ryan took over the business fully and became the sole owners.